Welcome to the Website of the JAPAN SAMBO Federation

Japan, the “Land of the Rising Sun,” is a great sports-loving nation. Japan’s native martial art, judo, is an Olympic sport that has practitioners all over the world. Sumo, karate and kendo also have fans in many countries.

Japan’s sambo community has been a member of the International SAMBO Federation (FIAS) since its early days, and was also instrumental in its founding.

Many prominent Japanese judoists and wrestlers have competed in sambo, including Mr. Nobuyuki Sato, a national judo champion and two-time World Judo Championships winner, who went on to win the 1st Sambo European Championships as well.

Today, 85 countries are members of FIAS. World championships, continental championships and numerous international competitions are held every year and continue getting stronger.

Sambo has been included in the program of the Summer Universiade (the Olympics for university athletes) to be held in Kazan, Russia in July 2013. Taking this opportunity, the Japan SAMBO Federation has become a “general incorporated association” so as to further promote and develop sambo in Japan, and better contribute to the activities of FIAS.

The General Incorporated Association Japan SAMBO Federation was established for the purpose of improving the minds, techniques and bodies of people through the martial art of sambo, and building international friendships that will contribute to lasting peace. 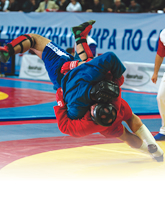